Recently, a number of emails have been forwarded to me asking my opinion about the discovery of the 1921-D VAM 1X early die state. Well, I’m excited about it! Since the 1980’s, I’ve been a major proponent of collecting by die stages, and along the way, there's often been considerable resistance. But much has changed, and now die stages are, at least in my opinion, an integral part of VAM collecting. 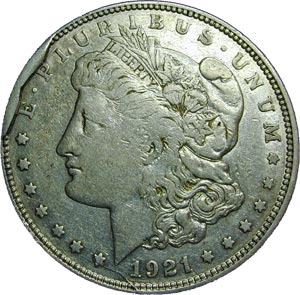 That said, it should not be surprising that I was quite excited about the discovery of the 1921-D VAM 1X early die state (now VAM 1X1). I believe it’s a fantastic discovery, especially in light of the fact that countless collectors have been trying to find one for such a long period of time. And certainly, kudos go for its discovery! I’m sure many VAM specialists thought it would never happen.

However, one thing should be considered, as well. Technically speaking, it’s not the die pair that gets a variety into the Top 100, Hot 50 or Hit List 40, but rather it’s the variety feature. For instance, the 1891-P VAM 2A die pair without the "Moustache" is not a VAM 2A, but rather is a VAM 2. One could go down the list of coins with dramatic variety features, and the same would be true. Look no further than an early die state 1887-P "Donkey Tail" that only displays a die crack, long before it shows displaced metal from the die break. I have one, but it’s not a Top 100 coin. And what about the discovery of the original die pair for the 1921-S VAM 1B "Thornhead" progression. It apparently shows none of the effects that make subsequent die stages so collectible. So, from my standpoint, it's not a Hit List 40 variety, even though I find it quite desirable for research purposes.

The upshot of all this is the fact that the 1921-D VAM 1X late die state made it into the Hit List 40 precisely because of its breathtaking die break features. Few would question the fact that the VAM 1X (now VAM 1X2) is the most dramatic shattered die known for the entire Morgan dollar series. And that makes the VAM 1X exceedingly important as a VAM variety. Indeed, without it the top VAM listings would be missing an important component.

I understand the VAM 1X should not be a required variety for the PCGS Registry listings, as thus far there has only been one late die stage specimen found. I worked for years to resolve this problem, and it became clear that just adding another variety to replace the VAM 1X would only open a Pandora’s Box of problems. Whoever’s variety got the nod would be happy, while the vast majority of collectors, each promoting his own favorite VAM, would feel left out in the cold. So, the better solution was to not have it worth points in the PCGS Registry until another one is found. 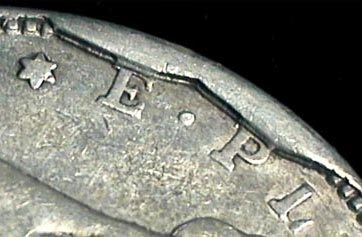 Let me address another issue. Some have said that the VAM 1X should be labeled a "mint error," rather than a variety. But these massive cud die breaks are no more a "mint error," than saying the each stage in the 1888-O VAM 1B "Scarface" emission sequence is a "mint error." Just ask the collectors who have paid huge premiums for a late die state "Scarface" whether they believe it is a “variety” or a “mint error.” I think we all know the answer. Otherwise, one could argue that EVERY die pair, other than the VAM 1 listings for each date and mintmark, could be considered unintended "mint errors."

And so, I must again congratulate the discoverer of the VAM 1X1, the early die state of the 21-D VAM 1X. It’s a great find, and given the awesome power of the "thrill-of-the-hunt," who knows what’s just around the corner! Another late die state VAM 1X?

All rights Reserved © 2019 Jeff Oxman • October 2019
No part of this article may be reproduced by any means without the written consent of the author.

Editor's Note - 2019: As I recall, this article was written sometime in or around 2014 to answer questions about whether the VAM 1X early die state should actually be considered part of the "Hit List 40." Well, we felt that some of the discussion here might be useful even today.