There are few, if any, U.S. Peace dollar varieties that are as well known or as popular as the 1922-P "Moustache" variety. Indeed, if you ask non-variety coin collectors to name just one Peace dollar variety, it’s more than likely the "Moustache" variety will be the first, and maybe the only one, they mention. Why? The VAM 12A has a dramatic, easily seen "naked-eye" feature that literally demands a double-take. It’s spectacular! Yes, there are other die varieties in the Peace dollar series that are much rarer, but the amazing die break emanating from Liberty’s nose has what we call "wow" power. 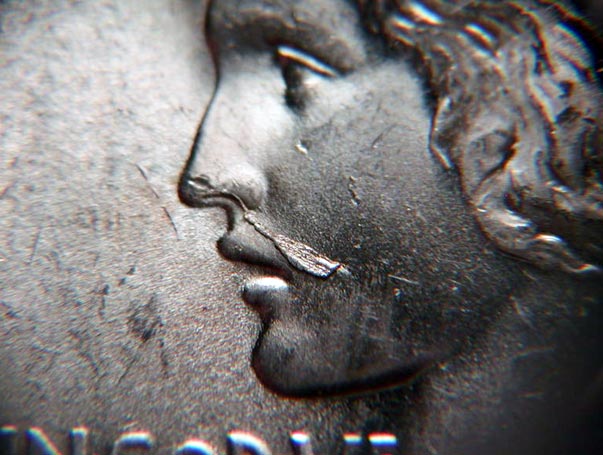 Image of the 1922-P VAM 12A "Moustache" variety from the Lloyd Gabbert collection, which at the time was the PCGS #1 Registry Set.
That said, the VAM 12A is a bit of an anomaly. Originally designated the VAM 2B by Van Allen/Mallis, it was later observed that the "Moustache" variety has a doubled die reverse, which Leroy Van Allen thought matched his description of the 1922-P VAM 12. Hence, the VAM number was changed to VAM 12A. Now having Herb Zepke’s actual discovery coin in hand, you can imagine our surprise when comparing the original VAM 12 and the reverse of the current "Moustache" variety and finding what appear to be two different reverse dies!

If true, what does this mean for Peace dollar collecting? A specimen of both the VAM 12 and VAM 12A will be sent to Van Allen, and he will make the final determination as to the respective VAM numbers. But a simple solution would be to change the VAM 12 description to match the VAM 12A reverse. The original VAM 12 would then be changed to another number. This makes sense, since many, if not most, of the VAM 12 coins already attributed may be something else, anyway.

In the accompanying chart, we’ve laid out the die progression of the "Moustache" die break, based on the large numbers of coins we’ve examined. Fortunately, we have located a VAM 12 specimen that seems to match the current VAM 12A designation, and we refer to it as the "Pre-Stage," since at this point in the life of the obverse die there are no indications of a future die break. Stage 1 reflects the fact that a die crack is likely to have formed prior to the ensuing die break. However, we have never encountered such a specimen, and the question is: Does anyone have such a coin? Then, in Stage 2 an actual die break is visible as a line of raised metal drooping down from Liberty’s nose. Stage 3 is a greatly expanded version of this die break, and Stage 4 is the Late Die State, which most would agree represents one of the most incredible die break features found on any U.S. silver dollar.

Sorting out the reverse die will do little to detract from the star power of this variety. After all, the iconic Peace dollar "Moustache" variety has captured the imagination of collectors since the earliest days of VAM collecting, and surely will continue to do so. The good news is that Mint State examples are still available, and when I was recently asked about picking up a nice Mint State specimen, I replied as I always do that there’s no better time than now!

All rights Reserved © 2018 Jeff Oxman • July 2018
No part of this writing or presentation may be reproduced by any means without the written consent of the author.
⇧