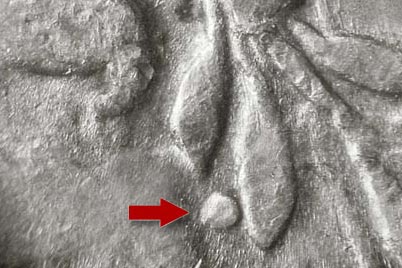 Some things just shouldn’t happen, like a Missouri plow-horse winning the Kentucky Derby, or you finding you can lose weight eating chocolate cake and milkshakes! But there it was—a large "extra berry" among the leaves on the lower reverse of this 1926-S Peace dollar and it looked like part of the design. Of course, it was not really an extra berry, as Leroy was quick to point out. Rather it was an unintended miscue on the part of some unknown mint engraver while he was preparing the die for use in the coin press. Specifically, what appears to be a raised "berry" is most likely the result of an engraver’s pointed tool inadvertently impacting the die. After all, who would notice? But the "extra berry" moniker has stuck, ever since this writer discovered the variety more than twenty years ago. Most would agree, the 1926-S "Dot on Reverse" VAM 4 is one of the more remarkable varieties in the Peace dollar Top 50, as there’s nothing quite like it anywhere else in the VAM universe.

That said, the VAM 4 is not among of the rarest varieties in the Top 50 listings. Based on the PCGS Population numbers, this variety is readily obtainable in all grades up through AU. It then becomes more desirable in MS60 to MS64, and is truly rare only in MS65 or higher. Naturally, we’re only talking in terms of today’s marketplace, where the number of Peace dollar VAM collectors is limited. Looked at in a different light, PCGS has encountered a total of 143 VAM 4’s in all grades, and that means that if just 150 collectors wanted PCGS slabbed specimens in the next upturn, there just wouldn’t be enough to go around!

At this point we focus our attention on the actual die progression for this variety. The obverse, according to Dr. Close began with the VAM 6 die pair. The reverse was then replaced in the coin press with the "Dot on Reverse" die, and this new VAM 4 die pair then went through at least two clashing episodes, as seen in the accompanying research chart. Next, the obverse die was replaced with a new one, and the dies clashed again. Finally, die cracks and severe die polishing further damaged the die to the point that both dies were taken out of service. Even so, given that we’ve delineated twelve die stages for the VAM 4, this variety enjoyed quite an eventful lifetime.

All rights Reserved © 2018 Jeff Oxman • April 30, 2018
No part of this research or presentation may be reproduced by any means without the written consent of the author.
Acknowledgement: Giving credit where credit is certainly due, the contribution of Dr. David Close to the data in this chart could not be overstated. There’s no question that Dr. Close is the foremost expert in that segment of our hobby known as U.S. Peace dollar varieties, and my research, or anyone else’s for that matter, rests squarely on his shoulders. Thanks, David, for so graciously sharing your knowledge and insights with the rest of us!

Jeff, Nice work on the die progression of this variety! With coins in hand, here are my comments: